This recipe for spicy tuna on crispy rice is from the cookbook, Peko Peko: Family-Friendly Japanese Recipes.

This dish may not be authentically Japanese, but its novel combination of classic ingredients evokes the culture. Japan is a hard-working, progressive country constantly on the cutting edge of innovation, and Spicy Tuna on Crispy Rice is a manifestation of those admirable qualities.

I decided to test this recipe because of the novelty of the ingredients and how they were presented. Not only did the ingredients look simple enough, but the flavors were balanced: seasoned rice, fried, with a spicy tuna topping resulted in a perfect balance of hot and cold, soft and crispy. Texture-wise, it was spot-on and would make a great passed hors d’oeuvre at a party, served on top of shaved raw carrots and julienned pickled ginger.

Things to take into account when making these: roll the rice tightly, and make sure to have a larger-than-usual roll size, this will provide you with a larger surface on which to place your tuna. Also, when frying, be extremely careful as the cooked rice has a lot of moisture in it and the hot oil/butter will spatter (nothing but stepping back from the stove quickly can help). The rice crisps up lovely, and mine resembled seared scallops, which was kind of fun!

The slightly dressed tuna was almost naked but with a touch of sesame oil and Japanese mayonnaise. I used Kewpie, which can be purchased at Asiatico in Santo Domingo; it’s a lighter flavor than regular mayonnaise, and it’s made with both malt and apple vinegar, as well as egg yolks, not whole eggs. Half of the tuna was spiced with Sriracha, while the other was left without due to flavor preferences in my household. They were equally delicious! 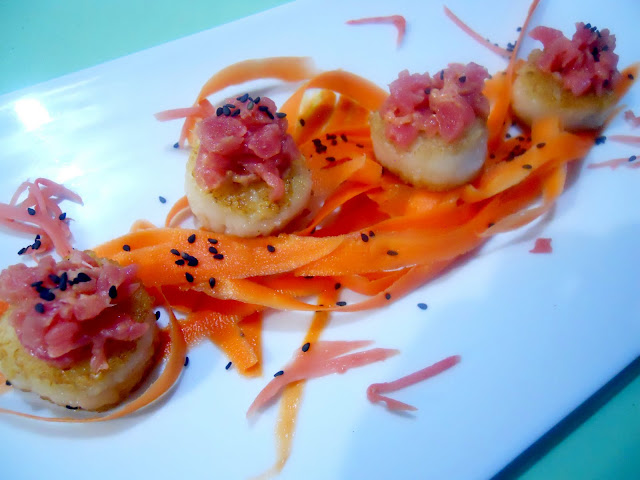 Yield: Serves 6 as an appetizer

For the crispy rice:

1. In a medium bowl, mix together the tuna, mayonnaise, tobiko, scallions,
sesame oil and Sriracha. Cover and reserve in the refrigerator
for at least 2 hours or as long as 4 hours.

2. Shape the cooked rice into a log by rolling it tightly in a sushi mat or
plastic wrap. The goal is to pack the rice as tightly as possible and
then to cut it into 2 x 1 1/2-inch logs. The tighter the rice is packed, the
less it will crumble. (Other options are to pack the rice into a spam
sushi mold or into ice-cube trays.)

3. Set a non-stick skillet over medium-high heat. Add the butter, oil and
tamari and heat until hot. Add a few rice logs at a time to avoid overcrowding.
Fry on both sides, using a lid to prevent rice kernels from
popping out of the pan.

4. When the rice logs are golden on both sides, place a teaspoon-sized
dollop of the tuna mixture on top of each one. Garnish and serve.